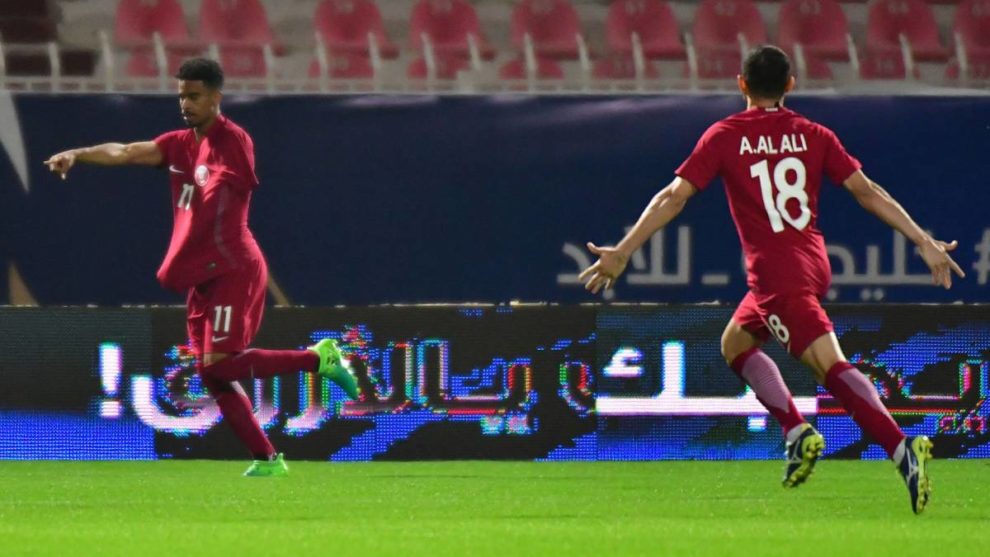 It certainly wasn’t a football match, but a mission to catch Yemen off guard and dent all their hopes of making it to the semi-final, as Qatar demolished Yemen by 6-0 to register a victory in their 2nd Arabian Gulf Cup match.

Kicked off by Qatar, the initial strategy from both sides clearly showed that the hosts were the powerhouse, as Yemen dropped back and decided to defend in numbers.

Only 4 minutes into the game, Qatar looked really established with the hold of the ball and had already made trajectory for 3 dangerous balls into the box. With Yemen under pressure, the Asian Champions pushed more numbers ahead, with only two defenders closing the backline.

As Qatar kept shape, Yemen were finding it hard to sustain and continuously cleared their lines. One clearance after the other, but Qatar in 29th minute finally set the route open as Abdelkarim Hassan scored from a sluggish defensive clearance to make it 1-0.

The team keeping momentum easily made inroads, despite Yemen holding well back into their area, and Hassan sting the opposition again only 7 minutes later to make it 2-0. The goal was an absolute stunner from a defender, who took the ball on to his right foot and scored from a long way out. Pity Yemen’s goalkeeper Salem Saeed, who got a hand to the ball, but could not stop it.

In the remaining minutes, the hosts had more opportunities, before Yemen’s defender Mudir Al-Radaei was shown a yellow card as the referee blew the half-time whistle at 2-0.

Yemen got the ball rolling for the second-half, and visitor’s midfielder Omar Al Dahi did try a thing or two to force an issue, but his dangerous ball was thwarted by Boualem Khoukhi.

Yemen quickly gave away the possession, as Qatar piled up the lead to make it 3-0 in the 57th minute via Almoez Ali. The striker swirled the short and deposited into the top corner as Saeed watched the ball end up into the back of his net.

Yemen were down to their knees by then, but Qatar were far from done on the night. In the 72nd minute Qatar were awarded a penalty, after Nasser Al-Gahwashi handled a ball from Ismaeel Mohammad in the box.

Qatar’s regular penalty-taker, Akram Afif handed the ball to Hassan, who hit shot in the centre as keeper went to his left, and completed his hat trick to make it 4-0. This was followed by another goal from a super substitution Abdullah Al-Ahrak, who took the shot from outside the box to make it 5-0 in the 85th minute.

But that was not that and Afif added insult to injury in the last minute, courtesy Mohammed Muntari’s assist, who hit a grounded shot that went underneath the goalkeeper to make it 6-0.

Felix Sanchez’s men will now take on the United Arab Emirates in their final group match in the Arabian Gulf Cup, in what is now a winner-takes-all showdown. However, a draw would also be enough for Qatar as they have a better goal difference.