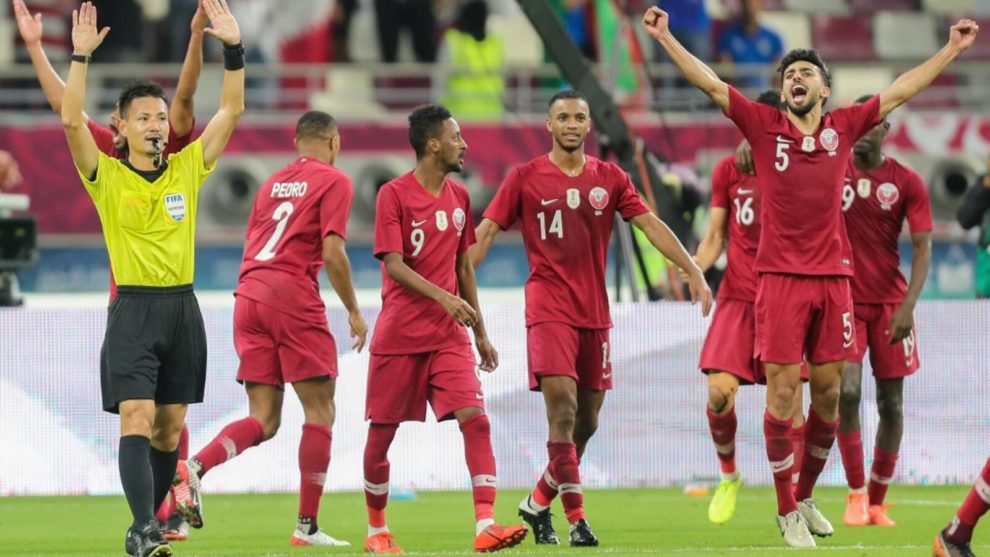 Akram Afif was all praises for his stupendous performance against the UAE, as his brace helped Qatar register a pounding 4-2 victory against the regional rivals. The hosts with a victory have registered a place in the semi-final of the 24th Arabian Gulf Cup, and will take on arch rivals Saudi Arabia on December 5.

Both teams relied on long balls to open each other’s defense, and UAE looked fragile defending at the back. UAE’s keeper Mohamed Al Shamsi also faced the heat after continuous pressing from Qatar.

With just 5 minutes played, Qatar had a brilliant opportunity to open the scoring after Abdelkarim Hassan latched onto a cross from Boualem Khoukhi, who headed the ball past the keeper who left his line close to close him, but ended up hitting the post from a narrow angle.

UAE showed signs of life and continuously kept hold of the ball, but could not pose any threat in the first 10 minutes of the game. Qatar came close to scoring again in the 18th minute, but Al Shamsi made a good save using his feet. However, Qatar hit UAE with a goal only two minutes later via Akram Afif to make it 1-0, who pounced onto the ball after Almoez Ali blocked UAE’s clearance and the former slotted it home through the legs of the goalkeeper.

Qatar having opened the scoring, soon got another opportunity to score via penalty after a VAR check confirmed UAE’s defender Mohammed Barqesh handed the ball in the box. Afif stepped up to take the penalty and made it 2-0 in the 28th minute.

UAE having suffered a double blow, won a penalty of their own only 5 minutes later. Ali Mabkhout took the spot-kick and converted to cut the lead in half at 2-1.

Qatar had more opportunities and could have easily restored their 2 goal advantage before the halfway mark, but could not, as Felix Sanchez’s team walked in with a slender advantage at the break.

UAE kicked off the second-half and gave away the possession cheaply. Meanwhile, Qatar once again posed real danger moving ahead and easily infiltrated the defense. In the 48th minute, Qatar’s captain Hassan Al-Haydos set up a brilliant through ball, which was well collected and hit by Afif, only to be denied by the crossbar.

For majority of the second-half, UAE were slick in clearing their lines and Qatar were quick to press after the loss of possession. In the 53rd minute, UAE’s midfielder was easily closed by Qatar’s skipper, who flicked the ball ahead to Almoez Ali, but the ball eventually fell for skipper, who made it 3-1 through the legs of the goalkeeper.

The third goal gave Qatar greater autonomy over the match, but UAE hit back 13 minutes from time to make 3-2. Mabkhout who was one of the stand out players for the visitors, scored from a corner delivered into the box. It was his as well as UAE’s second goal of the match.

However, the game was put to bed by Qatar in the second-half stoppage time, with Boualem Khoukhi heading the ball to the left side of the keeper to make it 4-2. And that was that as referee blew the full-time whistle.

Munner has five years of experience in covering sports news around the globe. He has a firm grip over the language. He is also a great poet who loves to describe nature through his poetry.