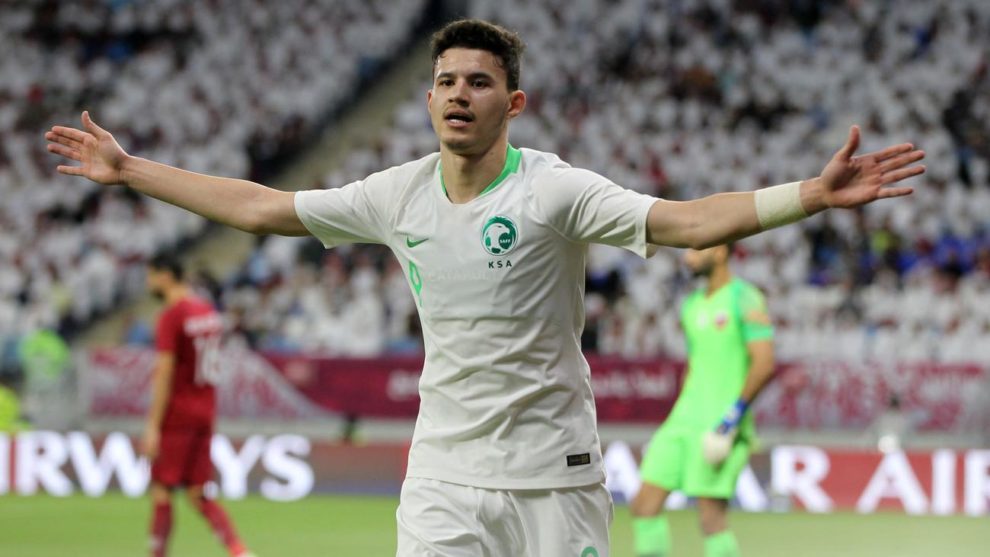 Gulf rivals Saudi and Qatar squared off at the 24th Arabian Gulf Cup semi-final on Thursday. The staging that was witnessed by more than 42,000 fans on hand and millions around the world, saw Saudi clinch a narrow victory by 1-0 to progress to the Sunday’s final against Bahrain.

However, the score line did not tell the true story at full-time whistle, because Qatar were all over Saudi Arabia for a better part of the match.

Saudi kicked off for the first half, but Qatar quickly took hold of the possession. Sitting back firmly in numbers, neither team wanted to concede in the early part of the match. Yet Qatar made a couple of dangerous penetrations into the Saudi box, with only 2 minutes on the clock.

Saudi looked dangerous while pushing against Qatar’s backline, but could not dent a blow. Meanwhile, Qatar came really close to scoring in the 7th minute after Ro-Ro passed the ball to Almoez Ali, who drifted it wide to the wrong side of the bar.

Qatar threatened again in the 10th minute, but once again lacked the finishing touch. The momentum also set the fans going, with Mexican waves taking the noise levels really high.

Moving ahead, Saudi tried marinating possession and stringing passes, but Qatar were quick to close down and break way. The team in the process did manage to find themselves on the counter break in the 25th minute, but Ali was fouled by Saudi Defender Sultan Al-Ghanam. Abdelkarim Hassan stepped up to take the free kick, and hit the ball straight into the air.

Against the odds, Saudi quickly broke away in the 29th minute and scored to make it 1-0. With the ball down the right and sent into the box, Saad Al Sheeb made a partial save, before 20-year-old Abdullah Al-Hamdan headed to break the deadlock.

Qatar looked to respond immediately in the 32nd minute, after angling a good ball in from the right and Saudi keeper made a mess collecting the ball, the ball was eventually collected on the rebound. But it nearly took out the Saudi defender.

Qatar kept attacking in the remaining minutes of the half and Ró-Ró with the last kick opportunity of the half, hit the ball straight at keeper who easily collected it, as the referee signaled for a break at 1-0.

Qatar kicked for the second-half of the semi-final, but Saudi attacked straightaway, looking to double their advantage. However, the initial rush only managed as far as inviting a foul from Akram Afif, who was shown a yellow card in the 50th minute.

This was followed by a yellow card shown to Saudi defender Mohammed Al-Khabrani only two minutes later. The restart looked a little sloppy on both sides, but picked up pace with Qatar’s attack in the 56th minute.

Afif made the run and delivered it to Ró-Ró on the right wing, who crossed it into the area, but the ball was collected and cleared easily. Once again, Qatar looked set and in real mood to find the equalizer.

In the 62nd minute, Saudi survived another scare after Qatar nearly hit the level terms. The ball delivered in from the corner was misjudged by the Saudi keeper, and it hit the post off him, but fortunately did not cross the line.

Qatar went on an attacking spree, forcing Saudi to sit back and avert the dangerous balls coming at it. The team won one corner after the other, but still had nothing to show for in the 65th minute.

Moving in to the final quarter-of-an-hour of the Arabian Gulf Cup semi-final, Saudi could sense victory and decided to defend the lead. Qatar also recognized the opportunity and pushed more numbers ahead.

From then, it was continuously Qatar with the hold of the ball, attacking mostly from the right wing, which was somehow kept out by the Saudi defenders. However, in the 82nd minute, Saudi had the chance to put the game to bed on the counter, but Sultan Al-Ghanam hit the cross bar. The ball fell for Yasser Al-Shahrani in the follow up, but was collected by Al Sheeb.

Qatar still had a lot going in the last eight minutes of the game, but could do no good to score the much craved goal. Even into the added minutes of the stoppage time, Qatar sat firmly inside Saudi’s area, but no one could apply the finishing touch, as it eventually ended 1-0 in visitor’s favor.